Aksel Cijntje- You Are A Hero 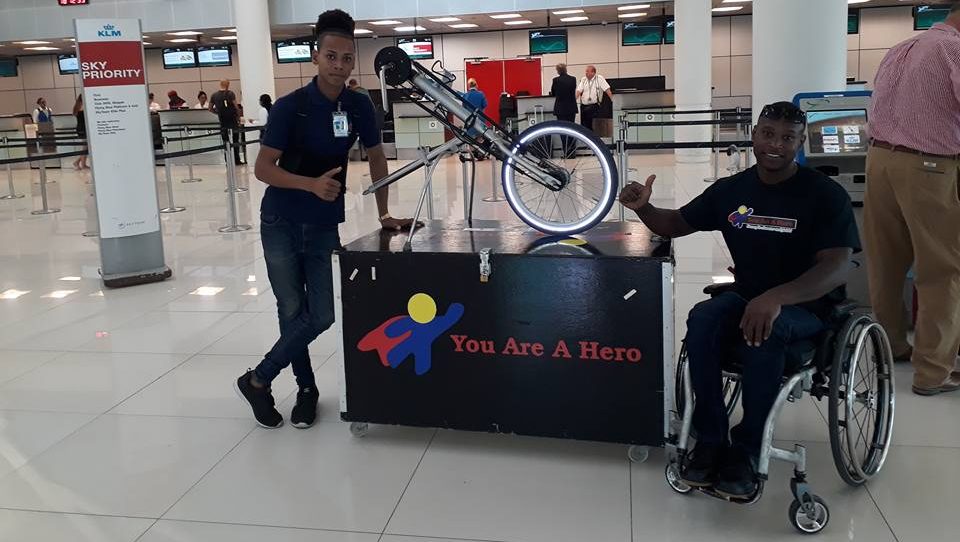 Your life could change in the blink of an eye. One day you could be crossing the street and a freak incident later, you become wheelchair bound. Although not a common occurrence, it is important for us to realize that no one is immune to something as devastating as a spinal cord injury. There are certainly many cases of spinal cord impairments that are due to congenital defects but statistics show that most paraplegics and/or quadriplegics become disabled because of injuries sustained to their spinal cord. And these injuries can happen in countless ways: through traffic or work related accidents, mishaps while doing sports, medical error and other incidents.

Six years ago Aksel Cijntje was at the wrong place at the wrong time. Living in Holland, he was shot in the back by a stray 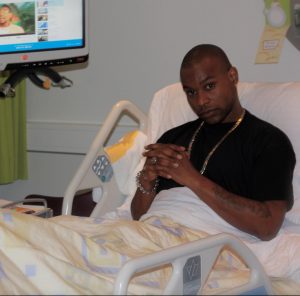 bullet during a brawl at a nightclub. The bullet permanently damaged his spinal cord and he’s been in a wheelchair ever since. The experience has not only changed the way Aksel views life but also how the world now perceives him. Regretfully, the ‘Abled’ often see people in a wheelchair as ‘damaged’ and erroneously assume that the disability extends to their mental capabilities or their capacity to function the same as an ‘abled’ person. They don’t seem to realize that a spinal injury doesn’t affect the victims’ mental capability; only their ability to walk. He could have let the unfairness of it all overwhelm him and sunk into a depression but he decided instead to change his life to fit his new reality. His road to rehabilitation, healing and acceptance has been a long and difficult one. There were no short cuts, just hard work and perseverance but with the help of family and friends and the right team of professionals, he was able to get his life back. Maybe not the same life he had before the wheelchair but a meaningful and worthy one nonetheless.

Aksel is coming to terms with his new lifestyle but in his own way and now he is on a mission. Besides training hard to fulfil his ambition of becoming a World Champion hand-biker, he is determined to help improve the lives of others who are wheelchair 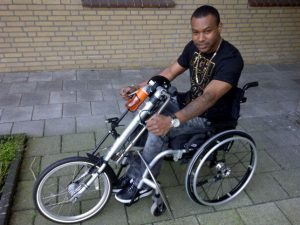 bound, not only in Holland but also on his native island of Curaçao. He established the ‘You are a hero Foundation’ and for the past two years he’s been dedicating his life to encouraging people in wheelchairs by holding motivational talks and working on raising their self-esteem through sports. He tries to open them up to the idea that they should never lose hope and that either way, in or out of a wheelchair, they can live a gratifying life. In a candid interview he talks about his own hopes and dreams, his victories and his struggles, in short, his new path in life.

A fervent believer in God, the one thing that gets him up every morning is his faith that he will walk again one day. Even though doctors have told him that he will never walk again he holds on to his faith. “God has given me spiritual help and guidance throughout my ordeal. I believe that He has the last word and even though I respect the doctors’ opinions; they are not God; ultimately, He is the one with all the influence.” Aksel states determinedly firmly. 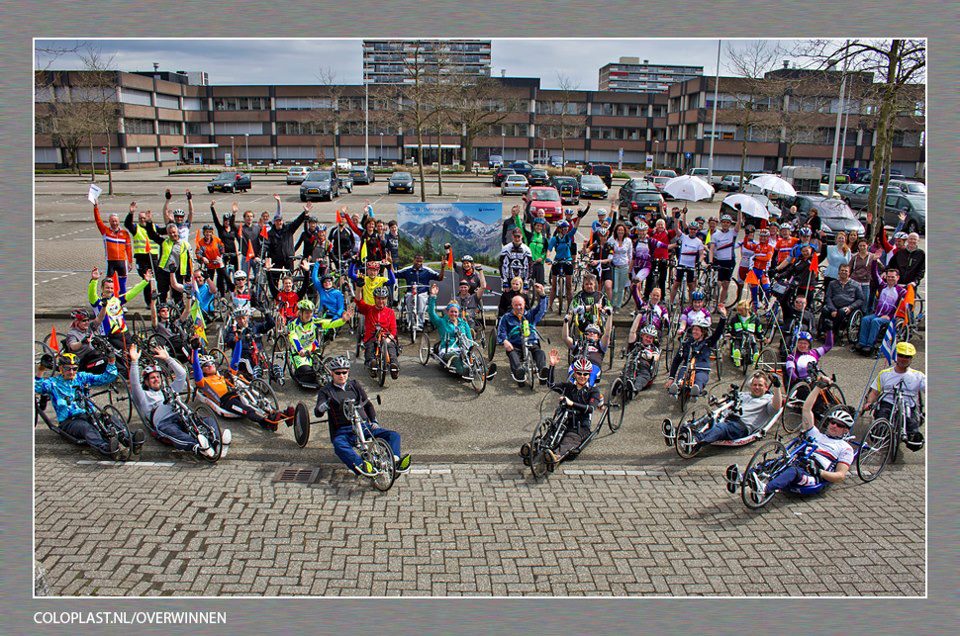 In 2013, while still undergoing rehabilitation, Aksel was invited to participate in a hand-biking tournament in Austria. It’s a championship held yearly between different rehabilitation centers and those who have recently become wheelchair bound get a special invitation. Over a hundred people compete in the race that comprises of a 40km course with a few challenging hills. Attending the race opened Aksel’s eye to an entirely new world. “It was humbling to realize that I wasn’t the only one in a wheelchair and that in fact, there were many others in far worse shape than I was. It made me thankful for the second chance God has given me at life; the opportunity to spend time with my kids and to do something meaningful with my life. It completely changed my state of mind and motivated me to not only push myself but to inspire others to push themselves as well.” He started taking the hand-biking more seriously, training hard and competing in different events in Holland and all around Europe, including the World Cup. He combined his training with holding motivational speeches and eventually launched the ‘You are a hero Foundation’.

“Through this foundation I want to help others in wheelchairs live fulfilling lives and realize that having limitations is a challenge not a limitation. The name of the foundation is dedicated to everybody who helps support my vision and joins me in this crusade. To me, they are the hero’s.”

According to Aksel, approximately five hundred people per year end up in a wheelchair for one reason or another in Holland and there are at least 12,800 people wheelchair bound in the entire country. The one positive note is that provisions for people with a disability are extensive in Holland. They get wheelchairs that have been specifically designed to fit each individual and the wheelchairs are replaced every five years. Most if not all public facilities are wheelchair accessible and people with a disability can lead normal productive lives while being completely independent. They go to work, participate in sports and well, simply do what every other person does daily.

“I could say that I was ‘lucky’ I became a paraplegic while living in Holland.”

Things are different in Curacao

He knows that things are very different in Curaçao. Although there are first-rate rehabilitation centers that provide optimum care, these entities are mostly aimed at improving patients’ mobility and strength. Once they reach a certain level, they are discharged. But they still remain completely dependent on others because the island’s infrastructure does not accommodate people with disabilities. And they also often have to make due with whatever wheelchair is available to them. “Most people on the island are using the wrong kind of wheelchair for their type of injury because that is the cheapest one they could afford or the only one their insurance would cover. To me this is unacceptable because I know it’s important to have a wheelchair that’s been custom made to fit your particular condition to avoid further damage to your spinal cord.”

Aksel decided to do something about it. Through his ‘You are a hero Foundation’ he is trying to obtain good-quality 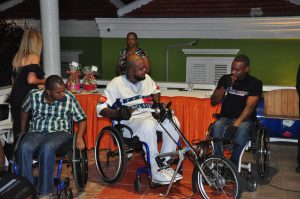 secondhand wheelchairs and equipment for people with disabilities on the island. He also realized that one way to help those with a disability in Curaçao was by changing the general public’s perception about people who are wheelchair bound so they would realize the importance of having wheelchair friendly facilities. Aksel figured that the best way to do this is by making wheelchairs more ‘visible’. He had already been active in Holland promoting all wheelchair sports and hand-biking in particular since that was his specialty so he decided to do the same for Curaçao. “We are planning to hold the first Caribbean World Cup Hand-biking Competition on the island from the 7th till the 17th of October of this year. We’ll be inviting people from around the world to participate in the event and we also hope to have some of our locals ride along in the opening round. But hand-bikes are expensive so we are still working on sponsorships to cover some of the costs.

Aksel is an inspiration not only to people with a disability but to everyone. He recently won the prestigious ‘Unique Sporter of the Year’ award in Holland for his perseverance in sports and in contributing to the community and in Curaçao he was recently surprised with the ‘Bon Yu di Korsou’ distinction. He is training hard for the new hand-biking season and while visiting Curaçao, he’s still been diligently training every day on his home trainer and goes on outings with different bike teams from the island. And he’s been giving them a run for their money! 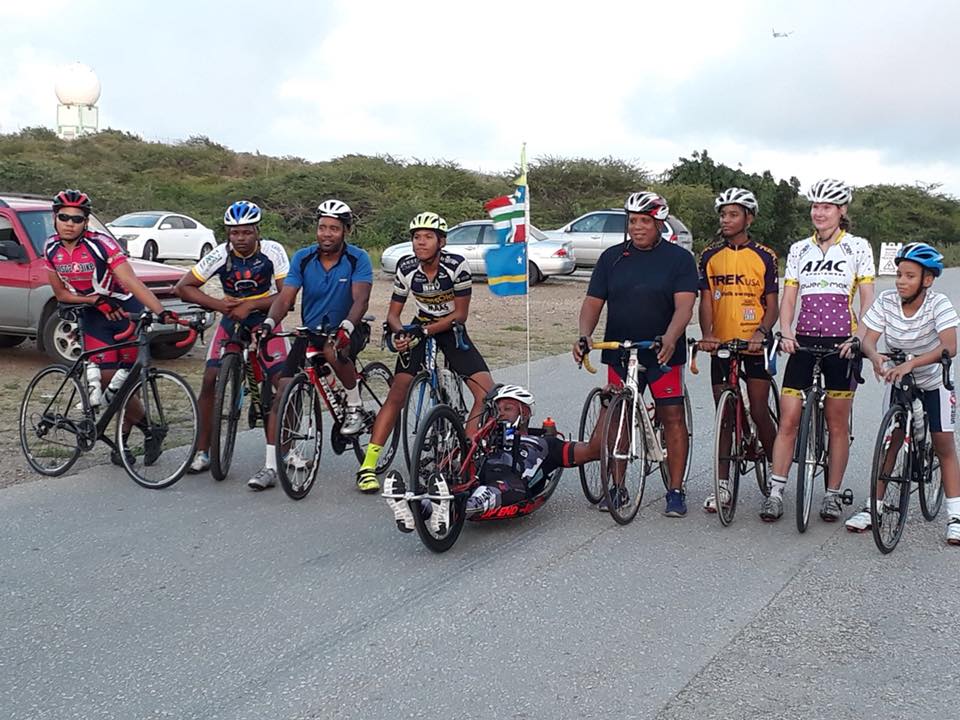