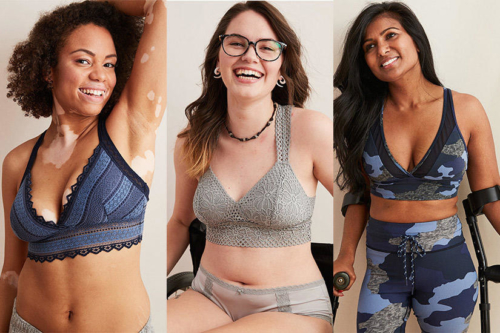 In a step forward for inclusive advertising, the lingerie and swimwear brand Aerie featured a wheelchair user as an underwear model for a recent ad campaign. Abby Sams, a 20-year-old from Athens, Georgia, was included as part of Aerie’s latest addition to its campaign #AerieReal.

Aerie’s recent shoot, of which Sams was a part, featured a model with an ostomy, one who uses arm crutches, one with type 1 diabetes and an insulin pump, and another with vitiligo, a skin condition that causes patchy discoloration. In a post after the campaign went live, Sams described her participation as part of a broader mission, “To remind young disabled women that they’re beautiful no matter what. Beautiful with mobility aids. Beautiful in a wheelchair. Beautiful with an invisible illness. Beautiful, not despite of those things, but because of them.”

Aerie has gained a name for itself by promoting body positivity, cutting clothes for and featuring models of a variety of shapes and body types. When its body positivity campaign, #AerieReal, was launched in 2014, the company chose to use untouched photos – ones where the model’s skin blemishes, stretch marks or other quirks hadn’t been photoshopped out.