Parenting From a Wheelchair: Year one of the Ewan Experience 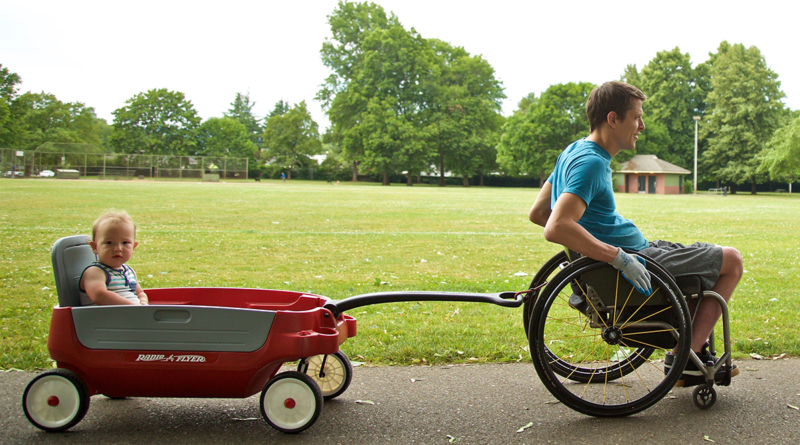 Kelly and I didn’t even have a name picked out before he was born. After eight months of waffling, Ewan and Micah were the boy-name finalists. Choosing a name that he’d carry through life seemed like a big responsibility.

Then out he popped, all wrinkles and cries and vernix and monkey toes. Ewan, I thought. That’s Ewan. “What do you think?” I asked Kelly.

I smiled again. Guess it fit.

If the many unknowns that awaited us on the other end of Kelly’s pregnancy, Ewan’s name was the first to be resolved. Like all first-time parents, we had a thousand questions.

My concerns about being a parent with a disability weren’t related to anything existential — like, what will he think about having a dad in a wheelchair? Or, what will his friends think? I knew enough fathers through wheelchair rugby to understand that to a baby, you’re not the wheelchair guy, you’re just dad.

But some of those dads could also count the number of times they’d changed a diaper on one hand. I have C7-8 motor-complete quadriplegia, which manifests in weak hands and poor trunk stability, and that was where my concerns were: How long was he going to tolerate my floppy-fingered fumbling with a diaper? How would I carry him around and get him into and out of a car seat?

Kelly would be going to back to work full-time after a few months of maternity leave, and I would be on my own with Ewan for eight to 10 hours at a time. I didn’t have the option of trying to change a few diapers, and saying, “this isn’t working, maybe you should just do it.” And I sure wasn’t going to sit inside with him all day.