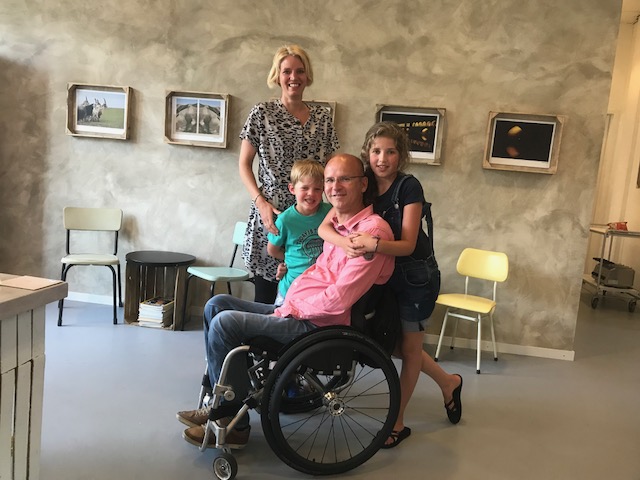 The Story of Roger Daal
It has been 25 years since the accident and 23 years since Roger Daal moved to The Netherlands. With a successful business to run, a wife and two beautiful kids to take care of, Roger doesn’t have time to dwell on the past or the ‘could have beens’ and he wouldn’t want to. He believes that life is what it is and that it is up to every person to decide what to make of it. You can choose to feel sorry for yourself or you can work towards building your own future, which is exactly what he’s been doing.

At 20 years old, Roger broke his neck in a freak accident while on vacation. He dove at a dead run from the beach into the breakers and hit a sandbar, suffering a spinal cord injury that left him almost completely paralyzed. After spending months in the ‘Verriet institute’ in Curaçao he was sent home; there was nothing else they could do for him.

I Learned The Hard Way
After practically sitting at home for two years, Roger decided to move to Holland, figuring that things would be easier for him there. Certain that Holland could offer him more possibilities. But it wasn’t exactly what he had expected. “The truth is, they only offer opportunities to those willing to work for them. Which in retrospect didn’t make my life much more different than in Curaçao. I still had to work hard to achieve my goals. I learned the hard way that if you need adaptations to be made to enable you to fit in with the rest of the world, it is up to you to fight for these changes. You can’t sit in a corner and expect it to happen. It was just the wake-up call I needed. I started challenging myself, pushing my limits,” Roger explains.

The infrastructure for moving around in a wheelchair, especially the ability to use bike paths makes it easier to move around in Holland but there are also a lot more buildings with multiple levels and only staircases, no elevators, compared to the mostly one-story constructions in Curaçao.  Most of the houses and buildings are also structured to use as little space as possible, so it’s a lot more difficult to maneuver a wheelchair at certain establishments. According to Roger, Holland also has an ‘every man for himself’ mentality. “If I stop someone in Holland and ask for help to get my wheelchair over a high sidewalk, they will simply say that they don’t have time to help and quickly walk on, while in Curaçao most people are ready to help you. People with disabilities are a common occurrence, you are just one of the many and you don’t get special treatment. It taught me that I was the one that had to adapt and in so doing I made it possible for myself to fit into society,” Roger says clear headedly.

The Right Equipment
When Roger first arrived in Holland, he had a brand new, top of the line ‘supersonic’ wheelchair, which his dad had bought for him when he was in Curaçao. Or at least, he thought he had the most modern wheelchair available. It broke down within 3 months of living in Holland because it just wasn’t suited for Roger’s living conditions. It made him realize the importance of having the right equipment. “For someone with a spinal cord injury the wheelchair is not just an accessory, it’s your lifeline to the outside world, your legs. Without it, you can’t leave the house and interact with others. But it also needs to meet certain criteria and should fit every person’s individual need. If you buy a car, you also take into consideration what you need it for. You are not going to buy a huge dump-truck if you plan to use the vehicle simply for driving from home to work and going to the supermarket. The same goes for a wheelchair. If you are an active person, you need something that is lightweight, maneuverable, easy to use and low maintenance. It’s not just a piece of metal, it’s an extension of you.”

This eventually got Roger thinking about starting his own wheelchair business. He had studied mechanical engineering and 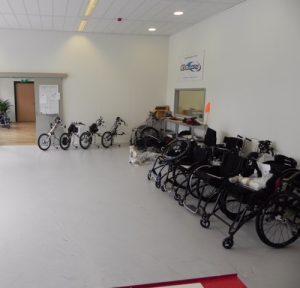 had been working for a company but wasn’t really getting much job satisfaction. He started a small company and called it ‘RD Mobility’, selling wheelchairs as well as the Swiss Trac, a coupling mechanism for the wheelchair that makes it easier for the rider to move on uneven ground. In 2014 he discovered a wheelchair made in Spain, which he started using himself and really liked and he went to Spain to meet with the designer. “We have been working together ever since and now I sell wheelchairs that I order from his company. The wheelchairs are then custom fitted to my clients for their specific needs,” Roger says proudly. And he should be proud, his small company thrived and he’s had to move to a larger location.

Even though Roger has been living in The Netherlands for 23 years, he still holds Curaçao close to his heart. He’s already built a life in Holland with a wife and kids and doesn’t see himself moving back to Curaçao but he does have appreciation for the island and is especially glad to hear about all that the Alton Paas Foundation is doing for people with a spinal cord injury.

“People with disabilities often believe that everyone has the obligation to help, that the world needs to adapt to them. It’s a phase most fall into, especially in the beginning. I should know; I’ve been there! You see yourself as the victim and it’s a very difficult role to crawl out of. You keep asking yourself, ‘Why me?’ when there really isn’t an answer and trying to figure it out is pointless. The question you should be asking instead is, ‘Can I make a difference?’ Alton Paas is a perfect example of that. Through his foundation he is bringing awareness to all, those with and without disabilities and with it he is finally changing the island’s perception and slowly but surely turning it into a more inclusive community where the disabled can also participate.”

Roger is planning to vacation on the island next year; he hasn’t been here in seven years and his youngest child has never been to Curaçao. When asked how his life has changed since the accident he is very direct, “I don’t think my life would have been any different from what it is now with a spinal cord injury, doing certain things might cost me a bit more energy but my life is no different than the next guy.”